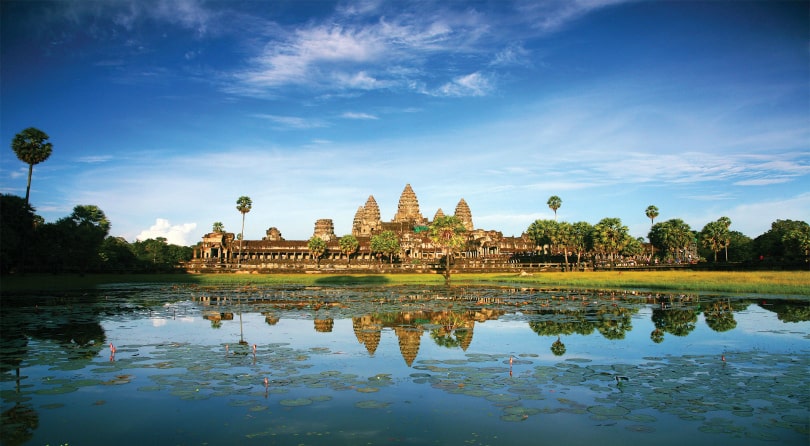 Tourists from some countries that do not have a visa-free regime in Thailand, additionally pay a visa of 1300.

Departure daily. Departure at 04:00, return at 22:00 - 23:00 on the second day.
Take with you: a passport, two photos 3/4, a migration card, a camera, something on your head, comfortable shoes, clothes covering your shoulders and knees, pocket money.

The price of the tour Cambodia includes: visa, transfer throughout the program, Russian, English-speaking guide, all entrance fees, hotel, 4 meals a day.

At 4.30 you will be picked up on a comfortable bus with air conditioning. About 4 hours to the border, with a stop at a gas station.
The first breakfast is not included in the program. Advised to take a lunch box from the hotel. Or you can just have a snack at a local cafe.
Somewhere at 8:30 arrival at the border. Here you will meet a guide who will take you to Cambodia. For organized groups of tourists will move fast. The border crossing during 20 min.

Later, in Cambodia, you are met by another guide who will be with you throughout your journey. With it, you get in the big buses and go to the city of Siem Reap, near which, and the world-famous Angkor Wat temple complex. The road will take another hour and a half. During the journey, the guide will talk a little about the history of Cambodia, about the infamous Pol Pot and the Khmer Rouge regime, which even in small groups hide in the jungle of the country.

Then check in to a very nice hotel Grand River View Boutique 4 *. Lunch.

In the program of excursions there is no Lake Tanlesap now, but if you want, for an additional fee of 500, the guide takes you to this interesting place where you can see the life of Vietnamese immigrants in all its glory. Houses on stilts in the water, children floating in basins. If you ride a boat on the lake, the locals will accompany you, show snakes and beg for money. Giving is not necessary.

After the mountain, you will go to the show Apsara, where you will see traditional dances of Cambodia. There is also a restaurant where you can dine. Buffet.
Free time. You can walk along Siem Reap, wander around the market, which is not far from the hotel. You can even see the local Walking Street, which is inferior in scope to its counterpart in Pattaya.

In Angkor Wat ... A great deal has been written about these greatest and most famous ruins of antiquity. Under the shadow of the Cambodian jungle, near the city of Siem Reap, is Angkor Wat - a huge Hindu relic, the largest ancient ruins in the world. But it is better to see once ... The excursion in this complex lasts about 3 hours.

Then you go to Bayonn with impressive stone sculptures of Buddha’s faces. The temple is decorated with rectangular buildings, with different heights and at different levels. On all sides of these buildings, the image of the Buddha is located in such a way that from wherever you look at it, you will certainly meet the look of the “Sage”.

Then Ta Prom - temples, absorbed by the jungle, where they were shooting the film Lara Croft with Angelina Jolie. The discoverers were so impressed with this place that they decided to leave Ta Prohm in the form in which it was found.

It is worth noting that according to the laws of Cambodia, only locals can be guides in all these places.

Then dinner and the Temple of Genocide, which keeps the memory of the Khmer Rouge, the terrible times in the history of the country. Not for the faint of heart.

Around 11:30 pm you will return to Pattaya. At this two-day option ends.

Those who purchased the tour for three days, on the last day will visit the Phnom Kulen Nature Reserve, which has attractions such as a recumbent Buddha, Thousand Lingam River, a huge waterfall, the ruins of ancient settlements and Khmer villages.

More options for excursions from Pattaya to Cambodia: